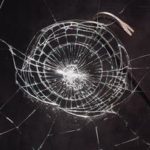 In comparison to regular films, Safety and Security films are uniquely constructed. Special solvents and adhesives are used to strengthen the bond between polyester layers allowing the film to adhere to glass more effectively. Thicker Security films offer greater glass hazard mitigation when faced with major glass hazard threats such as explosions and hurricanes. Safety films are used when the glass hazard threat is less severe like in the case of an accident at home or a forced entry.

Types of Safety and Security Films: